HOME
S. Heiner fine art photography
In Buddhism, "the other shore" is typically understood as enlightenment, achieved through the eight-fold path.
"A D+ Student's One Fold Path to the Other Shore"
One of the most challenging questions for believers is how God, who wed like to think ensures the FAIRWAY, can allow for the destruction of innocents." [Note the bicycle.] This question is often dismissed with non-answer answers, for example, 'Who are you to question Gods plan?' and 'God acts in mysterious ways.' While the horror of utter devastation lies underneath the day to day, ready to emerge at any moment, it's nevertheless there to be thought of as a constant challenge to our ordinary Judeo-Christian notions of God. Yet, perhaps, as the rusted billboard frame suggests, these notions have seen their day.
If not understood in anthropomorphic terms, a transcendent God is incomprehensible. For those who feel a sense of spiritual awe at the very thought of existence in general, pantheism offers a place to turn.
"The Rebirth of Spirit" [Composite Photo]
For centuries philosophers, religious scholars, mystics and the like [the hands in the photo] have sought Truth, that which underlies everything. God, Reality, whatever. To do so, Nietzsche says, is to turn one's back on the continual flow of what appears, with nothing underlying that appearance.
On Wittgenstein's account, to philosophize about Truth with a capital T is to take the word truth out of the contexts in which we're trained to use it to get things done in our daily lives and use it in a way where nothing gets done, where the wheels never gain any traction but instead only spin.
In other words, Truth is dead.
"Truth with a Capital T" [Composite Photo]
"Not So Fast"
The monk in this photo aspires to the kind of unity with world that the fish in the water evidence. This unity is echoed in the many circular elements of the scene, viz., the hat, the skimmer, the bowl and, of course, the fish. The monk has already achieved some success inasmuch as he blends into his background. The Buddha-like figure appears as we would imagine  to be equally in both worlds, viz., the world of the monk and the world of the fish. 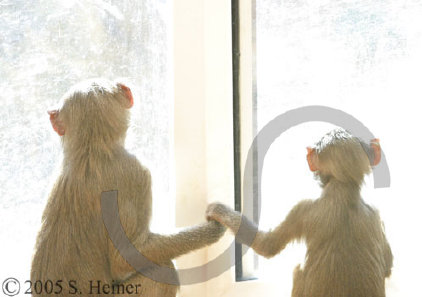 "The Zen Master's Zen Garden Wall" [Composite Photo]
The monk glides towards the light while engaged in simple work --chop wood; carry water-- which leads to the kind of emptiness (as suggested by the boxes) at the heart of Buddhism.
"Three Levels of Consciousness"
"EnLIGHTenment"
"Spiritual Therapy"
NEXT